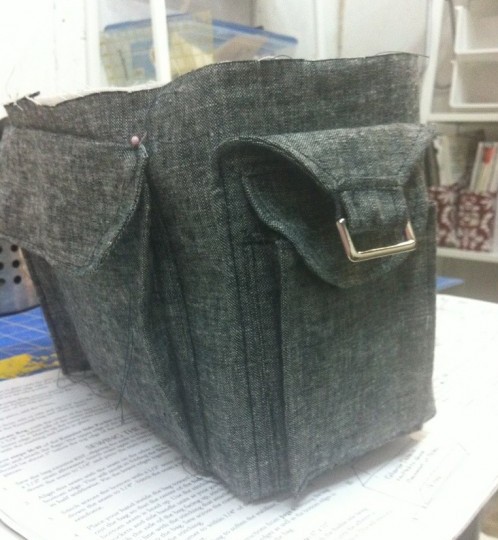 This was a weird Christmas for us: the first when our trio wasn’t together and our first as a duo in Southern California. So we did something new and different.

I’m lucky enough to have my sister live just down the street, so on Christmas Eve, we went to her (bigger and nicer) home and made goodies together. I used my trusty old Good Housekeeping cookbook for the ginger snaps and the recipe Grandma Coates used every Christmas to make butterhorns.

Both batches of Butterhorns turned out just beautifully and everyone who tasted them agreed that they tasted delicious. I don’t know, personally, because they are full of all sorts of gluten. I’d like to think that Grandma would be proud to have her Christmas tradition continue.

But then there were the gingersnaps. The recipe called for shortening and unfortunately we only had butter. No one really wanted to try going to the store at 8pm on Christmas Eve, so we stuck with the butter. Probably not the best decision I’ve ever made.

I hear they tasted fine, but with no snap at all and almost the entire sheet made up one massive cookie. Sorry, folks, no gingersnaps this year.

Meanwhile my sister made truffles from my own recipe I’d given her years ago and while the ganache cooled, we watched A Christmas Story. Again. Yet I still haven’t read the book like I swear I will each time we watch it. Maybe I’ll get to it this year? Doubtful, but you never know!

Traditionally onChristmas Eve we go out to my parents’ house and sleep over, but considering they’re in Oregon, the daughter and I just went home after the movie and wrapped a few last minute presents before heading to bed. Strange, yet not too bad.

We’d agreed to let my sister sleep in, but by 8:30 a.m.she was texting me to say her kids were more than ready to go, so we scrambled over there, opened gifts and saved the best for last.

A few weeks ago, I came up with what I thought would be the perfect gift for my daughter who likes to complain how we have no pictures or videos of her (in truth, she’s the second kid and I was newly divorced…). In fact, we have lots of photos of her, but not with me here in CA. I wasn’t even sure where they were when I called my son to see if he could help out. I wanted to put together a photo book of her life so far, but was swamped–could he do it for me? He didn’t even pause before giving me a resounding Yes! and he even had the big ol’ box of photos at his house. It was like a little Christmas miracle.

Over the next two weeks, he got more than a hundred photos scanned and designed the photo book for her, getting input from me via chat, text messages and phone calls during my commute. It was all very secretive and it totally worked.

Christmas morning came and I called my son via FaceTime so he could see as she opened the present, a thousand miles away from him. And he took photos to record the moment (while I took a screenshot).

Seriously, it was the best Christmas I’ve had in a while thanks to her being happy with the gift and the joy of technology bring us together in new and different ways. I miss that kid, but it was really fabulous getting to see him (even if it was on a little screen!).

We finished up the morning by making yet another mess in the kitchen (which my BIL was so kind to just keep cleaning up after us) and made homemade marshmallows using the delicious Martha Stewart recipe. I’ve made this a few times, but don’t attempt it unless you have a KitchenAid mixer. A hand mixer will never go fast enough and 15 minutes on high would kill the motor anyway. Believe me, I’ve tried. But luckily my sister has a KitchenAid, so we put it to work.

After finishing the marshmallows and divvying up the goodies, we grabbed one pic of all of us and parted ways, with the daughter and I heading out to the desert to visit a friend, and my sister’s family heading to the in-laws. And no, I have no idea why the little one has to look so stone-faced in every single photo I ever take of him. He really is a pretty happy kid, I swear!

One of my best buddies from Portland grew up in this neck of the woods and while she’s always headed down “to the desert” for Christmas with her family, it wasn’t until we got out there to visit her this time that I realized quite what she was talking about.

We drove into Lancaster area just as the sun was setting behind us creating an ombre effect in the sky that I really couldn’t catch on camera, but it was mind-blowing. Part of me wanted to stop the car and just stare at all that sky, but the part that wanted to get out to her parents’ house before it was pitch-black won out and we kept on driving.

We wasted away the night chatting, playing games, having some dinner and basically just interrupting their family time, but the next morning (after a breakfast of donuts they bought special for my daughter–so nice!) we headed out for some desert tourism.

Pretty much, it all looks the same. Mile after desolate mile.

But I found the Joshua Trees enchanting. When we’d driven in at nigh, we thought they were cactus and were super excited to see them. Turns out they are a tree instead and a rare one at that. There are all sorts of laws and permit-getting that surround the trees growing and being cut down (a huge no-no) because they survive in only a couple places and take pretty much forever to grow that big.

This is actually in Jaymee’s cousin’s front yard. I was cruel and joked about the lovely landscaping, but seriously, you actually can’t really grow stuff here. You could lay out sod (and she says they’re considering it) but the cost of water to keep it would be ridiculous and besides, grass wasn’t made to grow in the desert. (Frankly, I’m not sure people were either!)

We learned in the backyard that tumbleweed is a real thing and sharp. I only saw one actually tumbling down the road, but there were stories tossed around of tumbleweeds as tall as a man, blocking traffic and frequently causing trouble in the area. After seeing the odd plants, I tend to believe the stories.

We visited a couple of movie sets, including this one (Club Ed). It was made for a Dennis Hopper movie, but continues to be used for all sorts of things including something to do with Kim Kardashian. Supposedly she was there just last week, but since it was Boxing Day, the place was empty except for the security guy who just stared menacingly at us as we tromped around taking photos.

The whole place looked like something right out of the first season of Breaking Bad with meth lab trailers and abandoned houses. (But really, can you believe how blue that sky is?!)

We drove a little further to take a look around the 4 Aces movie set which was featured in the odd little movie, Rubber, and numerous music videos, commercials and films. We grabbed a quick selfie before the security guard there made us leave and took aim for the small town of Little Rock and the infamous Charlie Brown’s Farm.

There we found all sorts of new creations, including deep-fried Twinkies, Mounds bars, Snickers, and pickles. And they clearly need some lessons on being couth because that ad for the rice bowls makes me more than a tad uncomfortable. Yikes.

They did have the most delicious Mango smoothie ever though, so that made me like them a little bit. And someone knew what her hat meant which made us both happy after the fellow at the counter asked her if she liked playing golf.

Honestly, Charlie Brown’s Farm was one of the stranger places I’ve been to stateside with room upon room of oddities. We bought little matte marbles and a Native America-style painted wolf, alongside chili-cheese fries and the mango smoothie. They offered plenty more, but I think the doll rooms took the cake as the oddest part of the place.

And this little guy one as the creepiest doll I have ever seen or ever hope to see. I just keep wondering Why? Who? WTF?

We didn’t stick around long, eating our lunch outside under the watchful eye of these concrete dinosaurs and flirting tigers. If you look closely to the left of the dino, you’ll see a pterodactyl swooping in, as well. Yeah, it was a weird place.

But weird is often memorable and I’m pretty sure this trip out to the desert is gonna stick with us for a while. In fact, we’re already planning to head back out to see Vasquez Rocks.

One Reply to “Christmas in SoCal”