This week’s Sew Together Tuesday for Shannon Fabrics is the Chick version of the Barnyard Buddies Jelly Bean Pillow pattern. The pattern is from McKay Manor Musers and it’s a favorite. All the designs are super cute and they have a wide variety: cow, chick, Yeti, unicorn, dog, werewolf, etc. You can see them and download your own preferred pattern on their site.

You’ll notice a few tools that I really love: the Precision Stiletto from ByAnnie.com, flower-head pins from Clover and the BabyLock Crescendo sewing machine with a Schmetz 90/14 stretch needle. 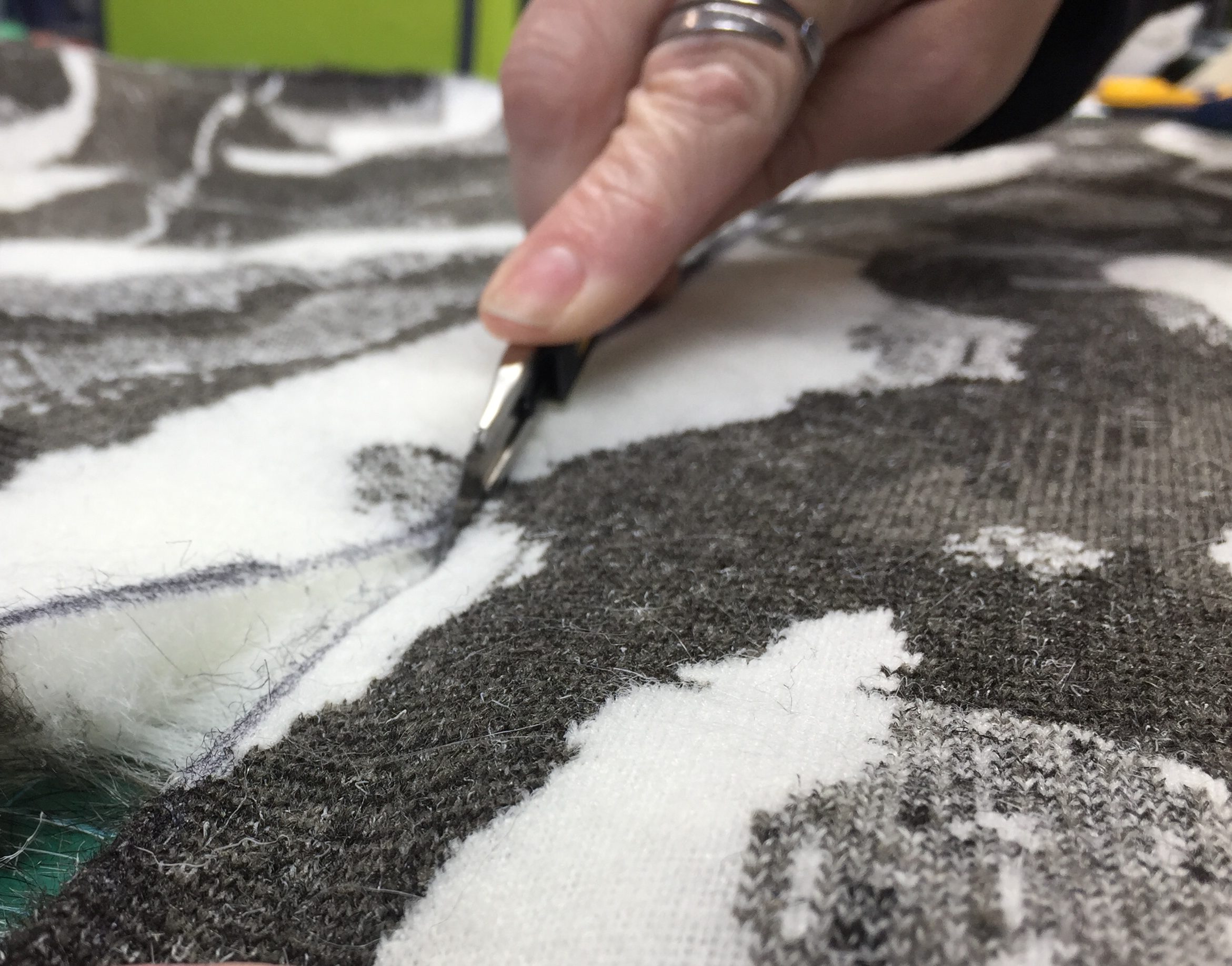 Last fall my daughter asked if I could get her some fabric so she could make a faux fur coat. I’ve made coats before and knew this was no small task and not exactly beginner-friendly. So I said, “Hey, let me make it for you.” She didn’t have much say because I was already holding the fabric hostage. 😉

I started by tracing the pattern onto the back of the fabric (Shannon Fabric’s Tibetan Sand Fox in Pewter/White). This was a pretty obnoxious task because it was SO MUCH FABRIC. Thankfully my work table is pretty big, so I managed. If I didn’t have this table, I would have just laid it out on the floor. The faux fur is so heavy, trying to do it on a smaller table would be super frustrating. I’m a big believer in not fighting with the fabric, if at all possible! If you look closely you can see that I’m using big bolts as pattern weights. I prefer them over the washers that many people use.  I find that they are just as heavy and so much easier to pick up.

END_OF_DOCUMENT_TOKEN_TO_BE_REPLACED 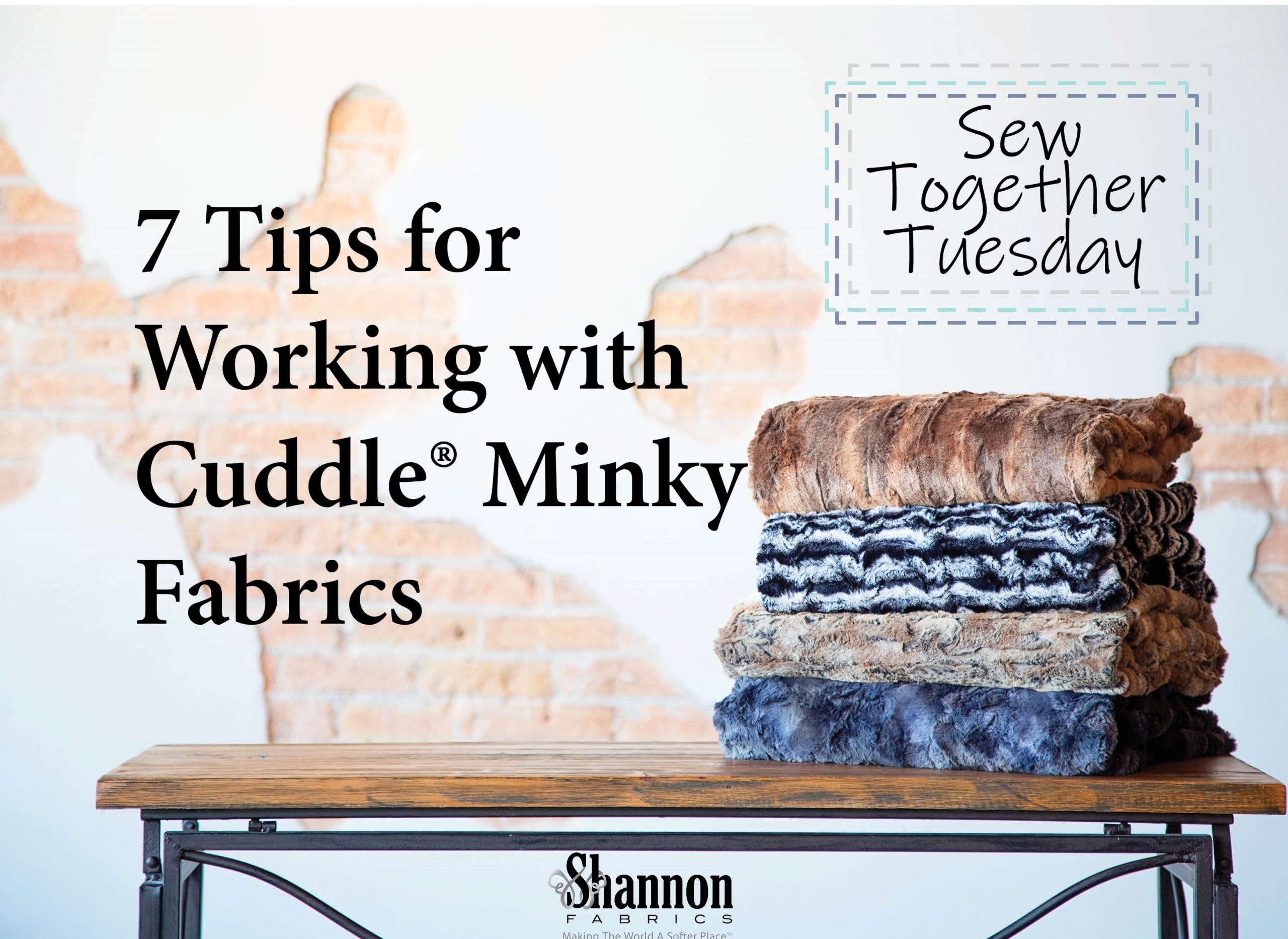 Over at Shannon Fabrics, we’ve started a series of tutorials and sew alongs that we’ve called Sew Together Tuesdays and I’m excited to be the host. Yesterday we did our first, a basic rundown of the seven tips that I think are most important when working with Cuddle minky fabrics. Check it out on YouTube and let me know what you think. I’m often on the road teaching quilters and sewists how to sew with minky/Cuddle fabrics, and this summer I was able to film some videos with Fat Quarter Shop. In this video I share a bunch of tips and tricks for making the most popular kind of Cuddle project: the strip quilt. Shannon Fabrics offers a wide variety of quilt kits, from 27″ squares to 58″ x 72″ throws, but regardless, they are all constructed in the same method. If you’ve been wanting to make one, but weren’t sure how, this video is for you:

Still have questions? Go ahead and ask! 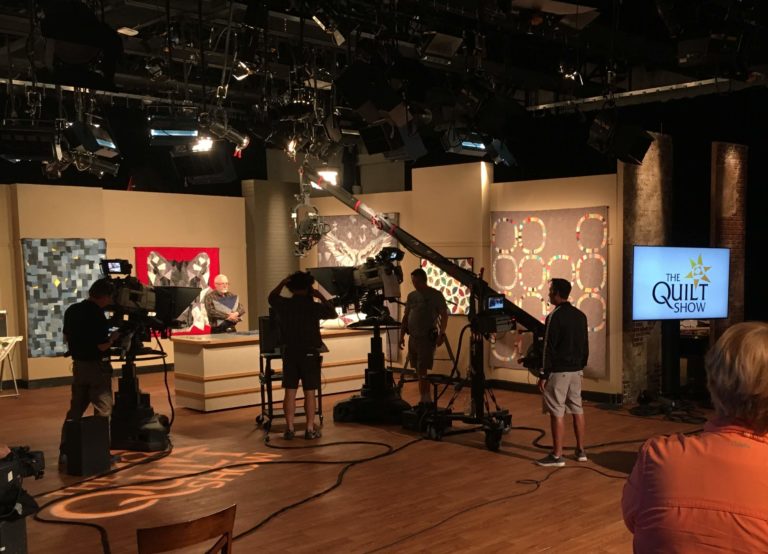 One thing I never expected to happen in my life:

But that’s exactly what I did on Saturday afternoon.

The craziness began at Quilt Market in the spring when Alex came by the Shannon Fabrics booth, excited to share the Wyatt Wolf quilt with her audience. I’d made it with a bunch of Luxe Cuddle, Cuddle Suede and Kona Cotton –which is kinda crazy in and of itself– and used a paper piecing pattern from Violet Craft to do it.  She invited me to come on the show and I did.

We talked about the Wolf Abstractions quilt, as well as the Ascension quilt I’d made with Hawke, a denim quilt I’ve been working on as a commission and the Freewheelin’ Single Girl quilt I made for myself.  All include fabrics/materials that are atypical in quilting: plush fabrics, denim, knits, used clothing, silver lame and more.

I have watched a dozen or so episodes of the show and have always enjoyed it, but I wasn’t expecting the level of production or kindness that I got.  Ricky is incredibly talented and his quilts left my mouth gaping. Alex is a pro at making people comfortable. Everyone behind the scenes was happy to answer questions, fetch waters, help carry samples and be there when I needed them.

The best part, though, was that my daughter was able to join me and play personal assistant/cheerleader. It made the entire weekend so much better to have her there, supporting my work and calming my nerves.

The show will air sometime later this year or early 2019.

If you’re a quilter, you’ve probably heard of Road to California, held in Ontario, California every January. I’ve wanted to go for years, but never had the opportunity until last week when, for five days, I hung out there in the Shannon Fabrics booth telling people that Cuddle fabrics are beautiful, soft and not nearly as difficult to sew as you’ve been warned.  I also got to talk up garments and blankets made from Embrace, the company’s double gauze fabric.

I always love the opportunity to get out there and chat with other quilters; this was no exception. Annette and I talked with hundreds of people over the time there, handing out patterns and charm squares, answering questions, and being the faces for Shannon Fabrics at Road2CA.

On Wednesday night, before the show officially started, I was back in the classroom and boy, was I thrilled. It’s been months since I’ve taught a class and I have truly missed it. We made up the Be Brave kit and out of 18 students, all but two were able to finish during class. I was so proud of everyone for working with a new-t0-them fabric in a less-than-ideal classroom (the tables were way too narrow so many of us took to the floor for the spray basting). We all had a great time and honestly, teaching feeds my soul. I didn’t even care that it ended at 10pm; I would have kept going if they would have allowed it!

The show happened to coincide with one of the biggest storms So Cal has seen in years, Sunday was a slow, slow day with torrential rains and a chill that invaded much of the convention center. I took advantage of it by checking out quilts and buying a few things for myself (what else is a sewist/quilter gonna do?!).  Here are a few that stood out to me

“Wickedly Green” Made and quilted by Deborah Poole of Shelley, ID.
“This quilt was an experiment in linear precision, hence the “Wickedly.” I wanted the majority of the background fills to be lines. It’s kind of fun, the blue thread highlights different areas from different angles of observation, exactly what I was hoping for, and the reason I didn’t us e a lighter weight thread. This quilt has 293 hours of hand-guided quilting that took nearly 8 months to complete.”

“Insanity” Made and quilted by Kristin Vierra of Lincoln, NE.
“This quilt is based on a photo of an antique quilt made in the 1800s.  One hundred and thirty 2-inch Lemoyne Stars seem to float across the top, accented by traditional feather and grape leaf quilt designs. All of the stars are appliquéd to the quilt top.”

“Summer Lake Sandhills” [detail] Made and quilted by Joanne Baeth of Bonanza, OR.
“Large groups of Sandhill Cranes arrive in early spring in SE Oregon and NE California. Summer Lake is a large refuse with extensive wetlands and a ridge that rises to 7000′ in elevation. The feathers for each of the 34 Sandhills were inked, cut out, and fused one feather at a time. Silk organza fabric was used to create a receding shoreline at the bottom of the quilt.  Bushes and grasses were thread painted.”

Detail from the handwork  of the Tentmakers of Cairo group who had a large display at the event.

As always, I was awed and inspired by the work of others. If you get the chance to visit a local quilt show, do it; it’s always amazing to see the beauty that others create with fabric and thread.

Truth is when I interviewed for my current job at Shannon Fabrics, I’d avoided using the fabrics that they sell. Cuddle is a lovely feeling minky fabric that I only knew about from the complaining others had done in the past. I’d heard sewists and quilters gripe about its slippery nature, the preponderance to stretch and had stayed away except when I absolutely had to tackle it in a sewing class or private lesson.  Double gauze had seemed unwieldy and I had no idea what to do with it anyway.

Then I got a job at Shannon Fabrics and knew it was time to tackle this fear of the unknown. I take pride in my adventurous spirit; it was time to put my suppositions and assumptions to the side and give this stuff a try.

My first was a Little Pilot kit, a Wee One quilt that would be perfect as an oversized pillow, I thought. I got cocky, sewed the strips together –wham, bam, thank you, ma’am–and suddenly I realized I wasn’t even close to infallible. It turned out all cock-eyed and more like a parallelogram than a square. I threw it in the WIP pile with a heavy heart.  (Since then I’ve learned what I did wrong and I’ll share that soon!)

But since I’m not one to really give up, I picked up the next project: a Honey Bun Patty Cakes kit that combines the two fabrics in case the fear of one wasn’t enough. This time I decided to actually read all the instructions, too. This might be a first in the last decade…. I pretty universally refuse to read the primer, but this time I figured why the hell not. And I’m so glad I did.

I marked all the edges just like the pattern said to do and brought each of the four corners together and pinned, then stitched them. I chain-piece as much as possible, so my apologies that it looks more confusing that it is.

I trimmed the seam allowances then flipped the corner in, tucking the Embrace double gauze in and pinning just before I flipped.

I didn’t pin it exactly as directed, I’ll admit it. The pattern suggests you pin before doing the corners, but I didn’t want to deal with all those extra stabby points so I did it after finishing the corners. And then on the third side I realized that I could actually just glue-baste it and it would work perfectly well.

Once I brought the yellow Rose Cuddle over the bee Embrace fabric, I simply pinned it well and zig-zagged the edges down. Easy as pie. The other parts of the kit include a smaller little “lovey” that’s made similarly and a swaddle.

I made all three and still had some of the Embrace double gauze left over, so I whipped myself up a little scarf. The trick, just as I’d done with the other projects, was the starch. It kept it in check and I was easily able to fold over the seam. I had trimmed it along the gridlines of the gauze, then folded that down to match the next gridline. Then I went back and folded that raw edge and pressed again. That gave it a nice even scant 1/2″ hem which I really liked and it was much easier than fidgeting with a tiny quarter-inch seam.

So there you have it. When i need to to, I will actually read the instructions (then change them) and learn something new. It was easier than expected (way easier, actually) and I was able to not only make some samples to show off when I visit stores, but also make a scarf for myself in the process.  A win-win!